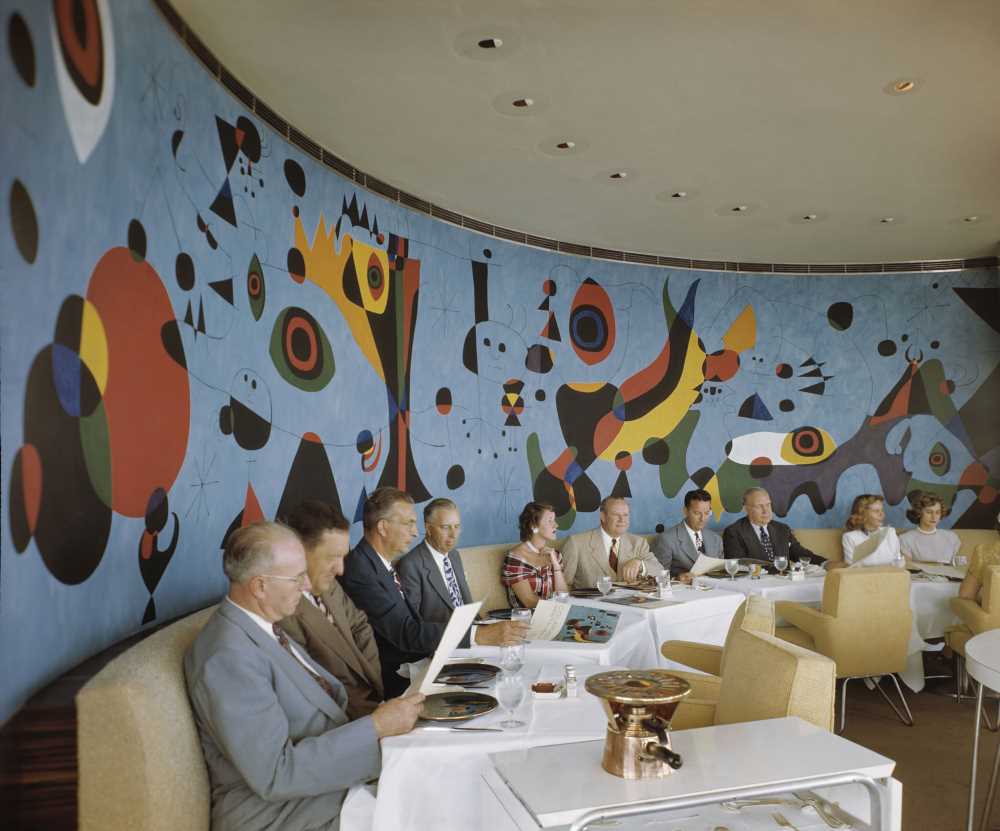 IN THE U.S., economics and atmospherics determine whether colonial inns, mid-century motels, and Gilded Age resorts survive. Keeping the doors open (and the roof on) at such historic hotels drives preservationists, but their passion for retaining and repurposing older buildings often runs contrary to the goals of developers and urban planners.

Conserving a building—and a business—that’s been around for decades, even centuries, presents more financial, structural, and historical challenges than throwing up a cookie cutter motel off the highway. It’s why two mid-century hotels made the National Trust for Historic Preservation’s list of the 11 most endangered historic sites for 2020.

A vintage postcard shows the patio at Santa Fe hotel La Fonda on the Plaza. The current adobe structure was built in 1922, but the site has held an inn of some sort since the early 17th century.
Right:

“You try both to honor a hotel’s history and be relevant to new generations,” says Jenny Kimball, the chairman of the board of Santa Fe’s circa-1922 La Fonda on the Plaza. “It’s a tightrope.” At the 180-room adobe property, that means balancing expensive modern renovations with grace notes from the past, like the folksy painted headboards in each guest room, some 1920s antiques, others faithful reproductions.

Checking into why some older properties thrive—and others don’t survive—reveals a lot about both the past and future of the hospitality industry.

The National Trust for Historic Preservation (NTHP) list spotlights grassroots efforts to save endangered older neighborhoods, battlefields, and lodgings, helping to define exactly what “historic” means along the way. “We look for places with rich stories that tell the full history of the U.S.,” says Katherine Malone-France, chief preservation officer for NTHP. “We also want properties that already have local groups working to preserve them.”

They’re remnants of the swinging, modernist energy of mid-century America, including the two on the National Trust’s 2020 list: the 1948 Terrace Plaza Hotel in Cincinnati, Ohio, and the 1960 Sun-n-Sand Motor Hotel in Jackson, Mississippi.

Both properties have been caught in preservation limbo for years. The modernist Terrace Plaza—which once featured electronic convertible sleeper sofas and a Joan Miró mural—closed to guests in 2008. It’s been deteriorating ever since while developers and lawyers haggle over its future. (That Miró mural is now displayed at the Cincinatti Art Museum.)

Built in 1960, the Sun-n-Sand Motor Hotel in Jackson, Mississippi, is shown in a vintage photo.
Right:

The outdoor stairs at the Sun-n-Sand Motor Hotel in Jackson, Mississippi, show signs of damage. “But the building is solid as a rock,” says Lolly Rash, executive director of… Read MorePHOTOGRAPH COURTESY OF PRESERVATION IN MISSISSIPPI (LEFT) AND PHOTOGRAPH BY (RIGHT)

The Sun-n-Sand—a groovy motel with a pizza slice-shaped neon sign and ties to the Civil Rights movement—shuttered in 2001. It’s now owned by the state of Mississippi, which plans to knock down most of it to make way for a parking lot.

Figuring out what historic means

It can be difficult to convince developers and government grandees to appreciate—and to help save—some historic structures. Mid 20th-century architecture, with its blocky Brutalist high-rises and neon-signed, Jetsons-esque motels, can be divisive.

“It’s grandmother’s wedding dress syndrome: Your mom’s dress looks frumpy to you, but your grandma’s is cool,” says Paul Muller, executive director of Cincinnati Preservation Association, which is championing rehabbing the Terrace Plaza. “To some people, things that are too close to us in time, like from the 1960s and 1970s, just look worn out.”

Changing design trends, structural challenges, and a lack of a financial champion consigns some storied hotels to the construction dumpsters of history. Reno’s Mapes Hotel-Casino, a 1940s Art Deco behemoth where Liberace and Sammy Davis, Jr., once headlined, was imploded in 2000 despite being heralded by preservationists and landing on the National Trust’s 1998 list.

Barring a last-minute change, the Sun-n-Sand will soon be bulldozed, though the Mississippi government plans to repair its neon sign and restore its main lobby building to use as a meeting space.

“Preservation is not just about sentiment. It’s about making sure that buildings are put back into service and useful lives,” says Lolly Rash, executive director of the Mississippi Heritage Trust, which led the crusade to redevelop, not raze, the motel. “A parking lot and a state office building doesn’t accomplish that. That’s not going to bring in people.”TODAY’SPOPULAR STORIES

How to save a historic hotel

Many historic hotels succeed, operating continuously for decades or centuries, including the Beekman Arms in Rhinebeck, New York (open since 1766, and yes, George Washington slept there) or West Virginia’s Greenbrier (site of a resort since the 18th century, with some guest cottages dating to the 1830s). The secret? A blend of nostalgic, often-romantic atmosphere and no-nonsense financials. A ghost story or two can also scare up customers.

“Many of today’s new hotels are just bedroom factories, built one on top of the other. There’s very little patina to them,” says Carlton Varney, the curator/interior designer at the Greenbrier. The resort is noted both for its Hollywood Regency 1940s interiors (by the glamorous Dorothy Draper) and for its antebellum-style architecture. “So many new resorts are all beige, white, and gray. Places like the Greenbrier still provide layered, Kodak moments,” says Varney.

To save an older property from the wrecking ball, it usually takes a combination of historic landmark designation (state, local, or the National Park Service’s National Register of Historic Places), preservation advocacy, and funding.

Case in point: the 1956 Statler Dallas, a 20-story 1956 skyscraper in the heart of the Texas city’s downtown. It took three years and $230 million to restore its Mad Men-ish Jack Lubin lobby mural, upgrade its electrical systems, and carve out 159 new hotel rooms and 219 higher-floor condominiums. Condo sales and historic tax credits helped to fund it all.

Known for its focus on quality and design, the namesake luxury goods maker opened Shinola Hotel this January in downtown Detroit, Michigan. The 129 minimalist guest rooms are… Read MorePHOTOGRAPH BY CHRISTINA LIAOGRADUATE EUGENE

Downtown Louisville, Kentucky, is home to the original 21c Museum Hotel, which is more of an art gallery that happens to have a 91-room hotel as opposed to the other way around. The… Read MorePHOTOGRAPH COURTESY OF 21C MUSEUMHOTELSTHE HOXTON

This spring The Hoxton in Chicago’s West Loop became the latest in the portfolio of this quirky hotel chain. The photo-ready lobby feels like a living room, except that it leads to 182 guest… Read MorePHOTOGRAPH COURTESY ANTHONY TAHLIER, THE HOXTONEL REY COURT

The Line hotel brand develops interesting architectural spaces informed by their community. Its third and newest property, The Line Austin, which opened last year on the edge of the… Read MorePHOTOGRAPH COURTESY CHASE DANIEL, THE LINETHE WHITBY HOTEL

The Fitler Club has only 14 rooms. That’s because the Philadelphia center city property sits inside a private club with decidedly “likeable” bowling lanes, a golf simulator, and a lap pool… Read MorePHOTOGRAPH COURTESY ANNIE SCHLECHTER, THE FITLER CLUBHEWING HOTEL

“It’s very expensive to do a new build hotel, particular in city downtowns,” says Bradford Hudson, a professor of marketing at Boston College who researches historic hotels. “But renovating or running a historic structure can come with tax credits, municipal financing, and may be a less expensive way to enter a market than building something new.”

From factories to fine lodgings

Many historic hotels in the U.S. and around the world didn’t even start their long lives in the hospitality business. Older buildings that once served as factories (Lancaster, Pennsylvania’s Cork Factory), breweries (San Antonio, Texas’s Hotel Emma), or churches (New Orleans’s Hotel Peter and Paul, Washington, D.C.’s The Line Hotel) were transformed into hotels via what’s called adaptive reuse.

“They’re probably the greenest hotels around, the ultimate use of recycled products,” says Larry Horwitz, executive vice president of Historic Hotels of America, a hotel membership directory linked with the National Trust for Historic Preservation.

The opposite can happen too, says Terrace Plaza Hotel advocate Muller, whose thinks converting older hotels to condos or retail complexes also amounts to a preservation win. “Some things need to be frozen in time and kept exactly as they were, like Mount Vernon, but other buildings can be adapted,” says Muller. “You can get a reverberation and things that anchor you in a long history.”

Keeping a roof on the place

“These older buildings could be quite fantastical, complex spaces with towers, murals, indoor pools, and other things that are expensive to maintain,” says Andrew Scott Johnston, professor of architectural history and director of the historic preservation program at the University of Virginia.

To cover those costs, rates to bunk at historic hotels can often be high. This means hoteliers need to both harness their property’s notable architecture and tangible history but also be sure that the mattresses are comfortable, the restaurant is upscale, and that the heating system dates from the 2010s, not the 1910s. “Businesses have to decide if they want guests to think a hotel is old, with peeling paint and other problems, or have them think it’s historic and that some famous figure slept in their bedroom,” says Hudson.

“When given the choice between something new and something historic, if the functional aspects are the same, studies show even younger audiences will choose historic,” says Hudson. “They want to participate in the past, but in a desirable era, perhaps a past era of luxury.”

Idealizing bygone eras can lure couples for romantic getaways or meeting planners for conferences. It can also create controversy and cultural insensitivity amid the upgraded marble bathrooms and grand old ballrooms.

Many properties were operating during the racist Jim Crow/Green Book era, when Black travelers couldn’t stay in most U.S. hotels. “There’s a growing negative reaction to places with plantation pasts,” says Johnston. “One plantation hotel I visited had plans for a bridal suite in a structure colloquially called the ‘slave cabin.’ I hope that doesn’t come to be.”

Fix up one old house on a battered block, and you might inspire an influx of developers and DIYers. A similar spirit of renewal can also bubble up with spiffed-up historic hotels

Take the pastel wonderland of 1920s–1950s hotels in Miami’s South Beach neighborhood. The area buzzed with tourists and architectural styles from Art Deco to Space Age in the middle of the 20th century. By the 1970s, the zone had become dilapidated and crime-filled, part of the inspiration for the TV show Miami Vice.

A preservation group began championing South Beach in the 1980s, eventually landing the zone on the National Register of Historic Places and spurring both an influx of new residents and a boutique-hotel boom.

“When they’re preserved, these places become community anchors and touchstones again,” says the National Trust’s Malone-France. “It’s a combination of restoring the things that really define a moment in time and rehabilitating buildings for contemporary, active use. That’s the power of preservation.”