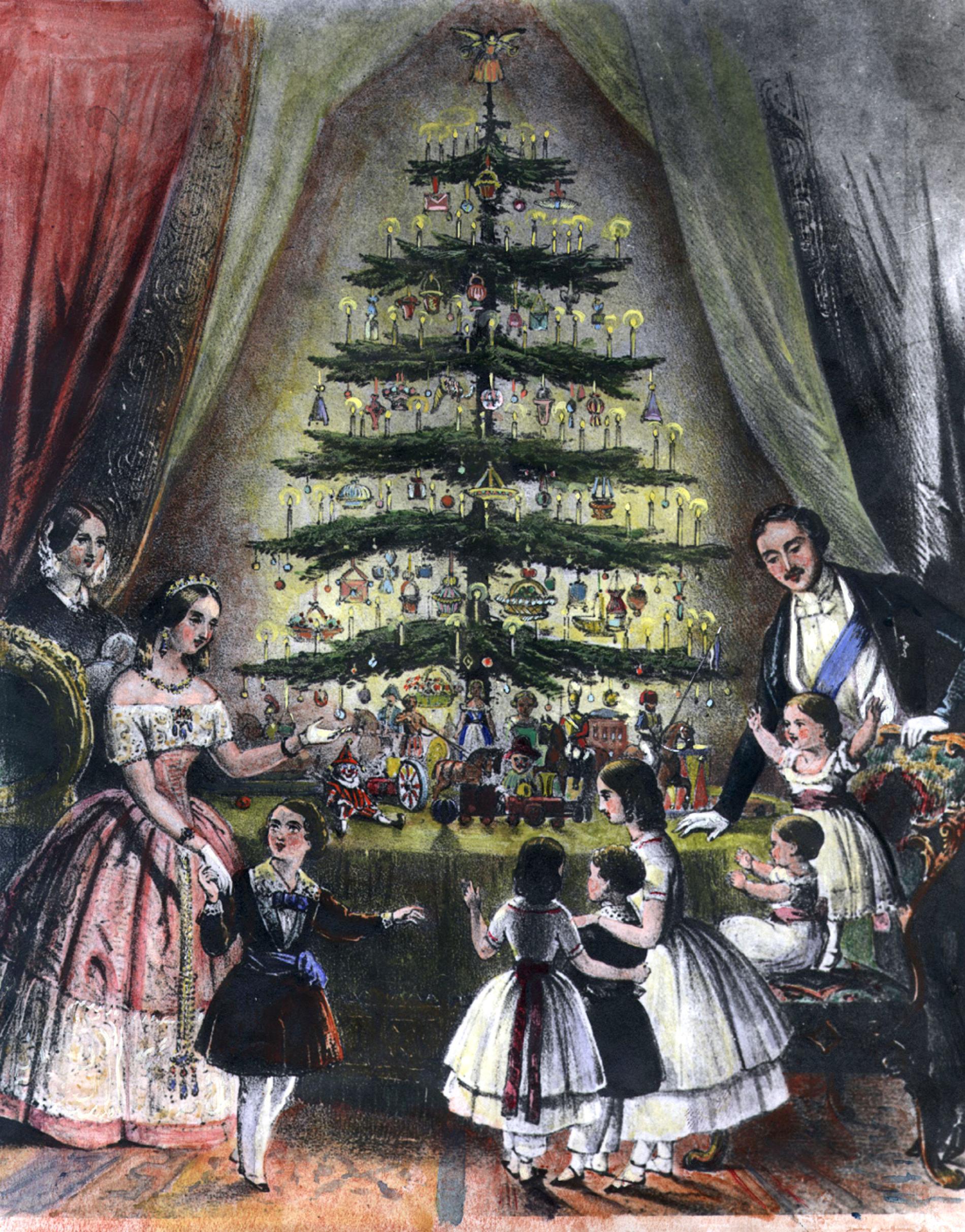 CHRISTMAS TREES ARE a strange tradition, if you think about it: Every December, people in regions around the world head to the nearest forest, chop down a tree, drag it into their homes, adorn it with lights, baubles, and tinsel—then unceremoniously drag it to the curb in January.

But evergreen boughs have been essential seasonal decor since ancient times as part of pagan winter solstice celebrations. “Evergreens at midwinter festivals were traditional since the ancient world, signifying the victory of life and light over death and darkness,” writes Carole Cusack, professor of religious studies at the University of Sydney, in an email.

It’s difficult to pinpoint exactly when and where these pagan traditions morphed into the tradition as we know it: Several countries claim to be the birthplace of the Christmas tree, and there are competing mythologies that seek to explain what it all means. But while Christmas trees appear around the world, their origins are traced to regions with abundant evergreen forests—especially those in northern Europe. Here’s a look at how the Christmas tree evolved into a modern icon—and inspired new customs along the way.

Latvia and Estonia both claim to have been home to the first Christmas tree. Latvia traces its Christmas tree traditions back to 1510, when a merchant guild called the House of the Black Heads carried a tree through the city, decorated it, and later burned it down. Meanwhile, Estonia has countered those claims, saying it has evidence of a similar festival hosted by the very same guild in its capital city Tallinn in 1441.

Historians have cast doubt on both claims. Gustavs Strenga of the National Library of Latvia in Riga told the New York Times in 2016 that the guild’s festivities were likely unrelated to Christmas. But that hasn’t stopped these two countries from fighting for bragging rights—and in Riga’s Town Hall Square, a plaque commemorates the spot of the first Christmas tree.

Instead, Cusack says it’s more likely that the Christmas tree as we know it was born in the Alsace region during the 16th century. (Now part of France, the region was considered German territory at the time.) Historical records indicate that a Christmas tree was raised in the Strasbourg Cathedral in 1539—and that the tradition had grown so popular throughout the region that the city of Freiburg banned felling trees for Christmas in 1554.

Folklore offers a number of different explanations for the meaning of the tree. Some suggest that it was inspired by the paradise tree, a symbol of the Garden of Eden that featured in a medieval play about Adam and Eve. Others believe the Christmas tree evolved from Christmas pyramids, wooden structures decorated with evergreen boughs and religious figures. Cusack doesn’t believe there’s any substance to those theories; instead, she says, “The Christmas tree was intended to be religiously neutral in the context of Christianity.”TODAY’SPOPULAR STORIES

Still, the tradition caught on among German families and slowly evolved through the years to what we know today. Cusack says that Protestant reformer Martin Luther is often credited with being the first to put lights on the Christmas tree—with candles rather than today’s electric lights, which were invented in 1882—after a nighttime stroll through the forest with twinkling stars above. German emigrants took these traditions with them as they resettled in other countries. By the 18th century, Cusack says, Christmas trees were all over Europe.

Queen Charlotte—the princess of a German duchy who married King George III in the mid-18th century—is thought to have introduced the first Christmas tree to the royal household. But it was another British queen who made Christmas trees the seasonal icon they are today.

In 1848, Queen Victoria and her husband Prince Albert (another German transplant) captured the imaginations of royal watchers around the world when the Illustrated London News published an illustration of their family gathered around a decorated Christmas tree. Queen Victoria was a trendsetter of her time, and so the tradition took off around the world.

Now, the most famous Christmas tree in London is the one that lights up Trafalgar Square each winter. This tree has a rich global history of its own: In 1947, Norway started the tradition of giving the U.K. a Christmas tree every year as a token of gratitude for its allyship during World War II, when the Norwegian government took refuge in the U.K. after the Nazi invasion.

Germany’s Christmas tree tradition also likely arrived in the United States in the late 18th century, when Hessian troops joined the British to fight in the Revolutionary War. In the years that followed, German immigrants also brought the tradition to the U.S. and, over time, historian Penne Restad writes that they “became a point of fascination for other Americans.”

American families adopted the Christmas tree more widely after 1850, when the Philadelphia-based magazine Godey’s Lady’s Book republished the royal family’s Christmas scene from Illustrated London News. But the magazine made a few tweaks, editing out Victoria’s crown and Albert’s royal sash to transform them into one version of an American family.

Today, the lighting of two beloved U.S. Christmas trees are part of the country’s ritual for ushering in the holiday season. In 1923, President Calvin Coolidge oversaw the lighting of the first National Christmas Tree; a decade later, in 1933, New York City lit the first Christmas tree at Rockefeller Center, which has since become a must-visit for tourists and New Yorkers alike each holiday season. Both trees have been illuminated every year since, save for a few years in the 1940s when they went dark due to blackout restrictions during World War II.

RELATED: HOLIDAY LIGHTS AROUND THE WORLD

The aroma of toasted almonds and glogg heralds the arrival of Saint Lucia to this charming river town illuminated all season long. Five million lights glitter on the buildings and on the… Read MorePHOTOGRAPH BY ROBERTO RINALDI, SIMETIVOLI GARDENS, COPENHAGEN

The Japanese Pagoda, a popular restaurant on Tivoli Lake, is among the many structures dressed up with holiday lights at Denmark’s 1843 amusement park and “pleasure garden,” the… Read MorePHOTOGRAPH BY SISSE BRIMBERG & COTTON COULSON, KEENPRESSVIENNA, AUSTRIA

Eight million lights sparkle in the wooded landscape of this resort complex, which stages its annual Fantasy in Lights. Woodland displays depict such holiday scenes as the March of the… Read MorePHOTOGRAPH COURTESY CALLAWAY GARDENSMEDELLÍN, COLOMBIA

It’s an over-the-top Christmas in Hong Kong, where lights twinkle along Main Street in Disneyland, the city’s malls try to outdo each other in awesomeness (Roppongi Hills Galleria… Read MorePHOTOGRAPH BY FRANCISCO MARTINEZ, ALAMYMADRID, SPAIN

The city’s Plaza Mayor features lovely lights without glaring glitz. Its holiday market dates to the mid-1800s and is a main source for figures for the Nativity scenes, or Belenes, that are displayed throughout the city. Events culminate with a gorgeous parade on January 5, the Eve of the Epiphany.PHOTOGRAPH BY LIESA JOHANNSSEN, GETTY IMAGESKOBE, JAPAN

Once under Spanish rule, this 16th-century city fetes its heritage. Single white candles once flickered from colonists’ windows; during Nights of Lights, the 144-square-block historic district twinkles with two million bulbs (each white, per city ordinance).PHOTOGRAPH BY JOHN COLETTI, GETTY IMAGES

Christmas trees have long been a tradition in Russia. Yet the brightly decorated trees that light up the Kremlin’s Cathedral Square every December these days are not for Christmas. These are New Year’s trees, or yolka, a tradition that emerged out of a ban on Christmas trees in the wake of the Russian Revolution.

In the 1920s, the newly installed Soviet government embarked on a campaign against religion—beginning with what it considered “bourgeois” traditions like Christmas. With Christmas trees and other customs forbidden, the secular regime began to encourage citizens to celebrate New Year’s instead.

But by 1935, Soviet leadership had a change of heart when it came to the tree. Pavel Postyshev, a senior Soviet official, published a newspaper article suggesting that families celebrate New Year’s Day with “fir trees sparkling with multi-colored lights.” But while Christmas eventually returned to Russia in the 1990s with the collapse of the Soviet Union, the New Year’s tree has remained a tradition ever since.

Even Antarctica has had its share of Christmas tree traditions—although there are no trees to be found in the South Pole. In 1946, crew members aboard a U.S. Navy expedition to Antarctica celebrated Christmas at sea by tying a spruce tree from Canada to their mast. More than half a century later, researchers based at the U.S. Amundsen-Scott South Pole Station created a Christmas tree out of scrap metal, complete with custom ornaments. Although the tradition briefly carried on—with iron workers adding new adornments each year—the National Science Foundation says the scrap-metal tree is no longer part of the Christmas celebrations at the Antarctic research station.

In Greece, people once decorated Christmas boats rather than trees in honor of St. Nicholas, the country’s patron saint and protector of sailors. Not only would families place small wooden boats inside their homes to symbolize a welcome return from life at sea, but lighted boats took the place of honor in public squares of cities such as Thessaloniki.

In modern days, however, the Christmas boat has been eclipsed by the Christmas tree. But such boats can still be spotted in some island communities.

Since the 17th century, Scandinavian families have dedicated a feast day to plundering their Christmas trees for sweets before throwing them out. Observed on January 13, Saint Knut’s Day is named for King Canute, who ruled in the 11th century. Primarily celebrated in Sweden, the holiday is considered the 20th and last day of Christmas—unlike other countries where the Christmas period is 12 days long.

To celebrate St. Knut’s Day, families hang cookies and other treats on their Christmas trees for children to raid. Once a family has finished stripping the tree of its decorations, people sing while tossing it ceremoniously out the door. (In Norway, the tree is chopped up and thrown in the fireplace instead.)

St. Knut’s Day traditions have faded as Swedes have started taking down their Christmas decorations earlier, but Swedish folklorist Bengt af Klintberg told the TT news agency in 2015 that the tradition will live on in the country’s traditional poems and rhymes.

One tree-adjacent tradition is Catalonia’s Tió de Nadal, a hollow log with a painted face that families bring into their homes in the weeks leading up to Christmas. Children are expected to care for the Tió de Nadal by wrapping it in a blanket and leaving food and water out at night. Then on Christmas Day, they beat the log with sticks to make it defecate presents and treats from a hole in its rear end.

According to NPR, this unusual tradition may have evolved from a pagan ritual in which people set tree trunks on fire to keep warm through the winter. But why does the log have to poop out its treasures? Cusack says that may be related to the Caganer, the figure of a defecating peasant in Catalan Nativity scenes who represents “the world turned upside-down, when at certain times the poor or disenfranchised are celebrated and the lofty brought low,” Cusack explains. “The idea is that the feces fertilizes the earth; the caganer embodies civil virtues.”

But the true origins of this Catalan ritual remain shrouded in mystery—and, much like other Christmas tree lore, may be lost to time.

WHY YOU SHOULDN’T CANCEL YOUR HOLIDAY

The Best Hotels and Resorts in the World: The 2021 Gold List