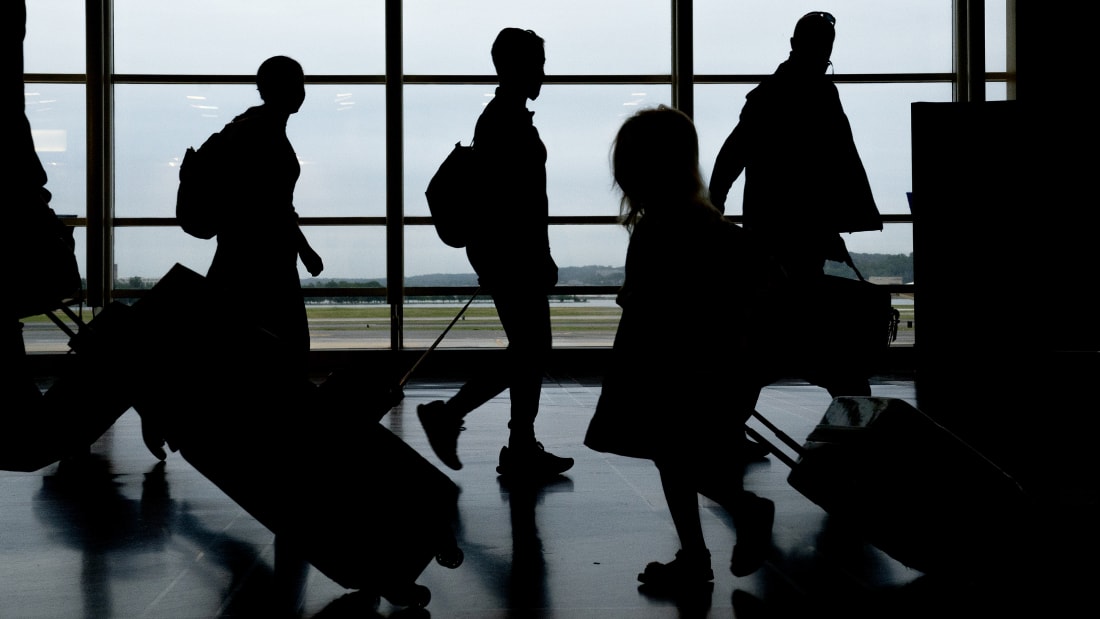 (CNN) — With more widespread vaccinations and relaxed travel restrictions, many people are making long-awaited vacation plans. But scammers are making plans of their own to separate eager travelers from their money via too-good-to-be-true vacation packages, fake airfare deals and other shady schemes.Consumer advocacy organizations such as Better Business Bureau are issuing warnings about an increase in incidents involving scammers who often pose as airline ticket brokers and travel agents via telemarketing calls. Another common tactic is imposter or “spoofed” websites that mimic legitimate booking platforms for airfare, hotels or rental cars — but do not deliver the product as promised. These kinds of scams are surging as leisure travel re-emerges — and are likely to remain a hassle for the near future. According to data from RoboKiller, a spam call and text blocker app, the estimated number of automated, unsolicited telemarketing calls (or robocalls) with a travel focus — for example, promising a free hotel stay or a deeply discounted booking — will grow to a staggering 4.9 billion in the United States in 2021, representing an 80% increase from last year. “Scammers do tend to follow what people are doing, because people are susceptible to scams that are believable and relevant to their daily life,” says Giulia Porter, vice president of marketing at TelTech, the mobile communications company that owns RoboKiller. “During Covid, we saw a lot of PPE and contact tracing scams, because that was what was going on in the world. Now we’re seeing travel scams because everyone is getting vaccinated and they want to travel again.”

Porter says one recent scamming strategy is using a pre-recorded, unauthorized introduction from a well-known travel brand — Delta, Booking.com and Marriott have been popular choices within the last month — as a way to build trust with potential targets. Spam texts promising a free cruise or other vacation deal also are on the rise, with RoboKiller projecting 2.25 billion travel-related messages sent in 2021, a 300% increase from last year.

Scammers use recorded messages stolen from well-known brands like Delta. Kent Nishimura/Los Angeles Times/Getty ImagesWhatever their form, travel-centric schemes rely on a different type of psychology than other common types of scams, such as a caller demanding your credit card info to correct a problem with your Social Security number or that you owe taxes to the IRS — often with the threat of jail time if you don’t pay up. “The end goal is the same: to get your personal and financial information so that they can then use that however they want,” Porter explains. “That comes in two different forms: more financial-based scams are using fear … whereas travel scams are more getting people to sign up for offers that are possibly too good to be true. “If it’s truly a scammer, they’re trying to get your credit card information to use it however they’d like.”The financial fallout can be disastrous. According to data from the Federal Trade Commission, $26 million was lost to travel, timeshare and vacation rental fraud from January to March 2021, with a median reported loss of approximately $1,100 per incident. Scams are on the rise elsewhere, too. In the UK and other parts of Europe where pandemic restrictions are relaxing, authorities are warning travelers planning summer holidays to be aware of bogus lodging offers, fake vaccine passports and other schemes circulating online and on social media.

High demand has led to a shortage of rental cars.Joe Raedle/Getty ImagesOne factor likely playing a role in the current spate of travel scams is that many consumers are still looking to score rock-bottom deals on airfare, hotel rooms and rental cars that were commonplace during the pandemic.But now that demand is back, prices have rebounded, especially in the car rental industry, where widespread shortages have spiked rates in many markets, especially warm-weather destinations like Florida and Hawaii. As a result, many consumers still determined to get a deal then explore alternate or unfamiliar companies they would normally overlook, creating a “perfect storm” for scammers to swoop in with deals and offers that seem too good to pass up, explains Charlie Leocha, chairman of Travelers United, a traveler advocacy nonprofit based in Washington, D.C.”It’s becoming prime time for scammers because the scammer can come in with lower airfare or a lower total price of a package,” Leocha told CNN. “When people don’t know what they’re buying, this is when they really become victims.”Scammers have become increasingly tech-savvy as well. In addition to “spoofing” official websites with fraudulent ones, they’re acutely aware of consumers’ purchasing patterns and how to create ads or sponsored links that pop up during a web search for keywords like “cheap car rentals” along with a desired destination.

WHICH COUNTRIES ARE OPEN TO VACCINATED TRAVELLERS? PORTUGAL, GREECE AND MORE

Why cruise ships are setting sail again as COVID-19 rages