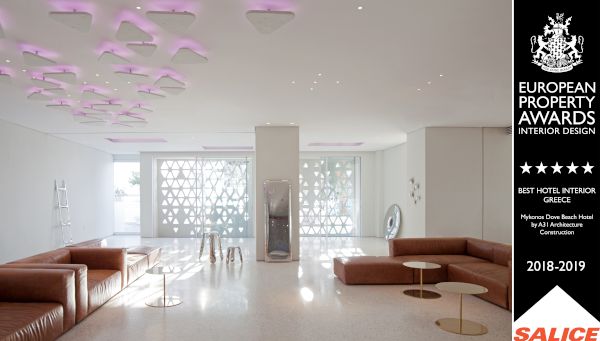 This award recognizes hotel’s innovative interior design and its unique concept which joins the history of Mykonos, its ties to the sacred island of Delos and Modern Greek living all together.

The award was received by the hotel owner Mr. Yiannis Theocharis and A31 Architecture Construction representative in the award’s ceremony held in London. This award is a considerable recognition both for the architectural office that is carrying out the project and the Mykonos Dove Beach Hotel as it has been nominated among 25.000 businesses and was among the 25 first award winners of the evening.

“It was a great reward for us for an excellent job that has been done from our partners. It made us very happy and encourages us to try harder” said hotel owner, Mr. Yiannis Theocharis.

Mykonos Dove Beach Hotel is considered by many to be one of the best 5-star beach hotels in Mykonos, Greece.

The hotel is under renovation and rebranding since 2017, with a total investment of 17 million euros. Since 1994, the hotel was operating under the brand “Mykonos Palace Beach”. Now, it has been renamed to Mykonos Dove Beach Hotel and its operating with 27 suites with private pool and jacuzzi whilst its capacity is expected to increase to 80 luxury suites at 2021 when the project will be completed.

Overlooking the beautiful beach of Platis Gialos and just a few steps away from well-known beaches of Mykonos as well as from the archaelogical site o Delos island, this brand new property offers a prime location and full luxury services to all guests visiting Mykonos.

Promotion of Mykonos and Santorini luxury tourism in Russia

Capturing images and stories across America as we approach the eve of a New...