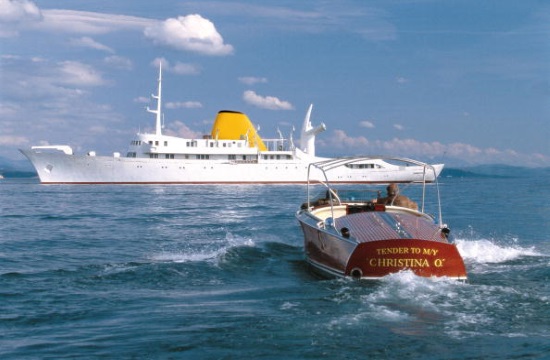 The historic “Christina O”, the beautiful yacht that once belonged to Aristotle Onassis, passed through the Isthmus of Corinth.

Constructed in 1943 as the frigate Stormont (GRT 1602), it belonged to the Canadian Navy and during the Second World War was used as an escort vessel for convoys to transport war materiel to the Allied forces, taking part in the Battle of the Atlantic and the Landings of Normandy. After the end of World War II, she was one of many surplus naval vessels.

Onassis purchased the frigate for $34,000 and then spent $4 million converting it into a luxury state-of-the-art yacht. He named her after his daughter Christina.

Following the death of Onassis, the yacht, based on his will, passed to his daughter Christina in 1978 in the ownership of the Greek State for use by the respective head of state. The vessel is effectively decommissioned. After 20 years it is bought by the shipowner Ioannis Pavlos Papanikolaou and renovated for the astronomical sum of 50 million dollars so that in 2001 it regains its lost glory.

The yacht is now of Irish interest, offered for rent to international jet setters. The most recent major social event hosted on the legendary yacht is the wedding of the former famous model Heidi Klum with one of the Tokio Hotel group’s members Tom Cowlitz last August in Capri, Italy in the presence of 120 guests with the cost of the ceremony estimated at 3 million euros.

Emirates’ $2b retrofit project for 120 aircraft will launch in November, finish by April...

Can I Travel To The USA?

Coronavirus and Travel: Everything You Need to Know

Unmistakably Katikies: An unprecedented campaign that will take you to the ever-alluring magic of...

Welcoming Spring with a big smile by SantAnna Mykonos

A Seychelles adventure beyond its glorious beaches