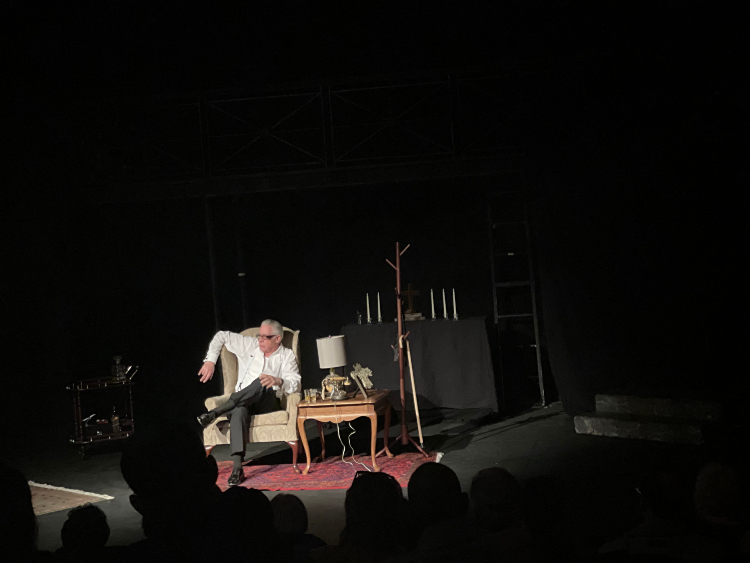 HellenicDailyNews.ny.com attended yesterday in an event that the members of the EMBCA and Hellenic Diaspora in New York organised, in order to honor the memory of Aristotle Onassis and to raise money for a very special cause. This year marks the 100th anniversary from the Burning of Smyrna!

It was an amazing evening on Wednesday, March 16, for EMBCA’s SOLD OUT” SPECIAL CHARITY BENEFIT PERFORMANCE of the “ONASSIS” Off Broadway play. “ALL” the ticket proceeds went to The Greek Division of Ronald McDonald and the Hellenic American Project of Queens.

College and thousands were raised. The benefit was in Association with AHEPA, and actor Anthony Skordi with his production crew. EMBCA’s President and the benefactor of the play stated “It was a great evening for very worthy causes and my appreciation and many thanks to all who were a part of it. After all if we don’t support our Hellenic institutions who will ?”.

This year is the 100 Year Anniversary of the Burning of Smyrna / Καταστροφή της Σμύρνης, the last phase of the 30 Year (1894-1924) Hellenic/ Christian Genocide by the Ottoman Turks. The fire was started by Turkish Troops on September 13 and extinguished September 22 in 1922. It is estimated Hellenic and Armenian deaths resulting from the fire ranged up to 100,000 innocents. Eyewitness reports described panic-stricken civilian refugees diving into the water to escape the flames and that their terrified screaming could be heard miles away.

The ONASSIS story, and play written/ produced and acted by Anthony George Skordi, is one of the tens of thousand stories of survivors of the Smyrna Genocide, and a story that had to be told. In his case Onassis a product of the Smyrna catastrophe became one of the most famous, richest and most fascinating charismatic men in the 20th Century. Born in Smyrna he fled the city with his family to Greece in 1922 in the wake of that burning.

He never forgot that during this period, he lost three uncles, an aunt, and her husband and their daughter, who were burned to death in a church running for safety during the Smyrna burning. With the Onassis family’s substantial Asia Minor property holdings lost, he and his family become refugees, like many hundreds of thousands, and Aristotle hell bent to succeed . The rest is history and a history this play ONASSIS explores.Assistant Director: George Zouvelos

The First Supermoon Of The Year Will Take Place This Saturday