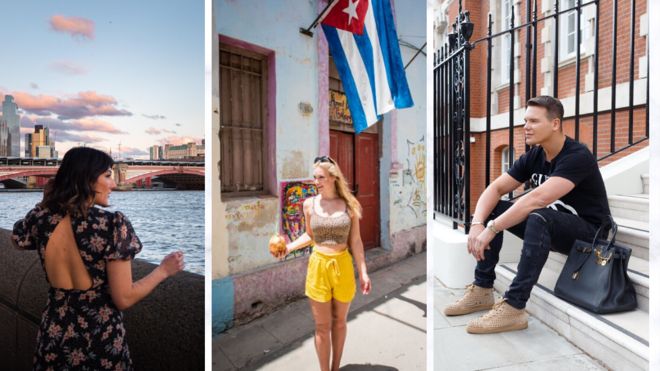 It’s hard to believe that even in lockdown, life on Instagram can look idyllic.

Last month, Manchester-born Jack Morris posted a photograph in his swimwear, standing in an infinity pool against a pink sunset in Bali.

“Lauren and I are trying to stay inside in our villa as much as possible and comply with social distancing,” he wrote.

“It sucks but if everyone does their part, the quicker this will be over!”

The post caused some of his 2.7 million followers to lash out, responding with comments like: “Things could be worse, mate.”

The economic consequences of the coronavirus pandemic are far-reaching, and advertising and marketing budgets are among the first things businesses are cutting back on as they try to survive.

That spells trouble for the media industry at large, all the way from the biggest of the newspaper brands down to the one-person-band social media creators.

And in the case of those so-called “influencers” not only is sponsorship evaporating, but also their ability to generate content as brands stop providing products to try out and ditch plans for press trips.

“My last trip was in February, I was due to go to Finland in March, Ethiopia in April and the Maldives next week – I probably spend over half the year out of the country,” travel content creator, Alex Outhwaite, explains.

Ad revenue from her YouTube channel alone has dropped to less than £100, down from around £1,000 a month. She’s also lost money on flights for trips that have now been cancelled.

“Everything has been turned upside down,” she adds. “There’s a limit to how long I can survive on the income that I’ve got and any savings I have at the moment.”

Karen Beddow left her job as a lawyer four years ago to run her family travel blog, Mini Travellers.

“It’s a small business that I’ve built up over the last six years and I’ve invested a lot of time in it,” she says. “I think people don’t necessarily see how much effort goes on behind the scenes – you have to be able to take the photos, edit the videos, send invoices, fix your website, answer emails.”

The Lifestyle Agency specialises in luxury lifestyle PR and affiliate marketing through links on blogs and social media. It says influencers were first to lose out on campaigns.

“Ad and marketing spend has been either cut drastically or thrown out of the window,” Khyara Ranaweera, digital director of the agency, says.

“A lot of businesses’ first response was panic mode: they shut their doors, social accounts and stopped spending.”

Israel Cassol – better known as Birkin Boy for his collection of designer handbags worth over £100,000 – is paid hundreds of pounds to attend events and feature brands on his Instagram account. Now he says he has to borrow money from his father to make ends meet.

“Everything has been cancelled,” he explains. “Normally, I post pictures with my bags and luxury clothes but nobody wants to see that at the moment – nobody is interested in fashion because they’re not going anywhere.”

Instead, Israel now posts about organising his wardrobe, ironing – and designer face masks.

The streets of popular photo spots like Notting Hill are deserted and there’s been a rise in posts featuring the hashtag #stayathome. On Twitter, countless bloggers have posted links to donation platforms on social media, asking people to buy them gifts or send money to #spreadkindness.

“For anyone who has a problem with me setting up an Amazon Wish List or buymeacoffee etc, remember I’m unable to do any sort of work right now,” influencer Mandy Rose Jones, wrote on Twitter.

“So for those who want to support, it’s nice to be rewarded for the hard work and energy that goes into creating fun content.”

Tabby Warley is a part-time Instagrammer who has been furloughed from her day job in retail. She would have expected to earn around £5,000 through brand partnerships in the coming months but has seen a slowdown in business.

“I’m very lucky that my Instagram is a supplementary income that I’m saving for a house deposit one day,” she says. “Obviously clothing retailers have shut down; a couple have gone into administration that I usually work with.

“In the pre-corona world, the trend was for businesses to throw money at influencer marketing. Common sense says that’s the first thing that’s going to be cut.”

But with engagement on Facebook up 40% and downloads of TikTok reaching record numbers, there is a captive audience to target.

Over the past few weeks Khyara says she’s seen a 7% increase in daily likes on Instagram with the hashtag #ad, and demand for influencer posts from lifestyle and wellness brands.

“On social media everyone’s either talking about mindfulness, fitness, beauty, or self-improvement-based content,” she says, adding that the real challenge is for influencers to create different content from their home.

“I was going to do spring/summer trends and holiday shoots, now I have to do work-from-home wardrobe,” Tabby says.

“It’s forcing me to be more creative whereas before I was resting on my laurels, going out into a pretty London street and taking a photo.”

For luxury influencers like Israel, it’s an opportunity to reflect on his industry.

“I’m trying to be very real at the moment,” he says, adding that he won’t buy any more Hermes bags this year.

“What I’m learning from this coronavirus crisis is to be more sensible with money.

“I don’t need to spend so much money on luxury items. I can reuse my clothes and mix chic with cheap.”

Best in Travel Mykonos – “The Ambassador”