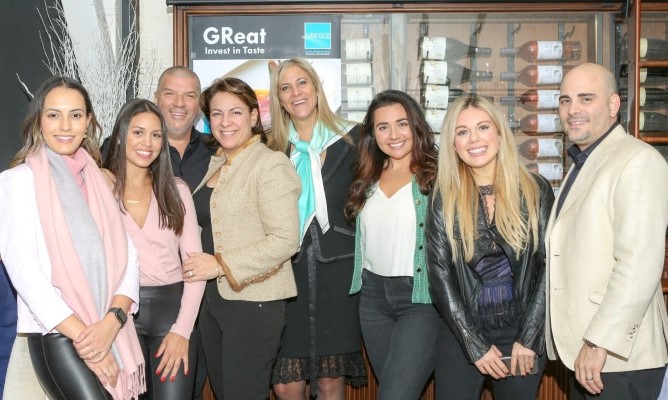 The “Hellenic Gastronomy Culinary Event, “GReat Invest In Taste”, organized by Global Alive LLC, was held on Wednesday 11-28-18at Nerai restaurant in the heart of Manhattan.

Over 30 journalists, bloggers and food editors, from well know American media outlets such as The New York Post & Forbes were in attendance. The Director General of the Board of Tourism of North America NFC, Greta Kamateros, was honored with the Achievement Award for her unrivaled and great contribution to Greek Tourism. Having an extensive educational background in marketing, Ms.Greta Kamaterou, successfully managed to apply her strategy and workforce to initiate a rapid rise and flow of tourism from North America to Greece.

The event was attended by well-known artist Philip Tsiaras, who once again expressed his great love for mother Greece, while he enthralled the distinguished guests on art and the passion of taste for Greek cuisine. While the award-winning Greek Board of Tourism film, “Greece: 365 Days destination”, played on a giant screen throughout the event.

Spyros Menegatos, owner of Nerrai, was an excellent host throughout the event, leaving the best impressions and flavors on the palate, for the professional, and demanding, representatives of theinternational media. The event ended with a taste of fine Greek liquor, rakomelo anda, and a raffle was drawn for three lucky reporters who won a trip to Mykonos and Santorini, presented courtesy of Aegean Promo, and represented by Kostas Skagias.

The organizer, Evageline Plakas, won the crowd and the impressions of the international media with her warmth and authenticity, and successfully organized the event with the aim of promoting Greek gastronomy in New York.

Can I Go To Greece? The Rules For Travelling From The UK This Summer

COVID-19: Stressed working from home? You are not alone, here’s how to beat it

Why we started an airline during a pandemic

A new love for medieval-style travel